Submit a Tip
Tip Follow-Up
Mobile App
If you have information concerning these suspects:  1(800)-AA-CRIME

WANTED
In late October, 2018, a witness observed an altercation inside a vehicle.  As the altercation progressed, a door was opened and a dog on a leash jumped out.  The door was then closed without the dog being put back in the car.  As the driver drove away, the dog was forced to run alongside the vehicle.  After three blocks, the leash was thrown out of the door and the dog abandoned.   the witness took the dog to a veterinary clinic for treatment for torn and bleeding paws.

On March 25, 2020 Sacramento County Park Rangers received a call about a transient male in Discovery Park punching and slamming a small puppy.

Three minutes later rangers arrived and Douglas Thumm was in the middle of a park roadway with a pull cart containing a small female puppy. With his back to the rangers, Thumm was bent over the cart repeatedly punching the animal in its face. The puppy could not escape the abuse. THUMM was able to punch the puppy 4-5 times before stopping the abuse upon ranger commands.

Animal Control took possession of the puppy and Thumm was transported to the jail for felony animal abuse. The puppy survived.

Thumm is transient and has an extensive record in several states. He has been frequently contacted in the homeless encampments. He is known to set grass fires and is sex registrant out of state. He failed to appear for court after being released after arrest, due to covid emergency bail schedule. 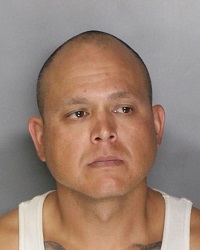 APPREHENDED
SAVAGE was responsible for the care of a victim dog.  The dog was left in a locked vehicle for over 14 hours.  The dog was suffering seizures and convulsing.   It was transported to an animal hospital where it died 20 minutes later.   Despite cooling efforts, the dog's temperature was 108 degrees.   SAVAGE is a convicted felon who was found to be in possession of a firearm and narcotics for sale.   He was last known to reside on the 7800 block of Blackfoot Way.
Sacramento Valley Crime Stoppers
Anderson Software © 2020 All Rights Reserved